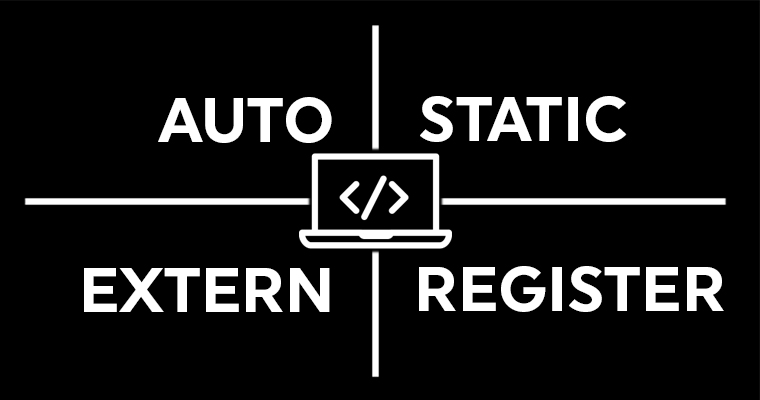 A storage class defines the scope (visibility) and life-time of variables and/or functions within a C Program. These specifiers precede the type that they modify. The following are common Storage Classes in C Program,

The example above defines two variables with the same storage class, auto can only be used within functions, i.e., local variables.

The register storage class is used to define local variables that should be stored in a register instead of RAM. This means that the variable has a maximum size equal to the register size (usually one word) and can’t have the unary ‘&’ operator applied to it (as it does not have a memory location).

Below code will execute without an error, you can see the way register storage class in C used in both the program

The static storage class instructs the compiler to keep a local variable in existence during the life-time of the program instead of creating and destroying it each time it comes into and goes out of scope. Therefore, making local variables static allows them to maintain their values between function calls.

The static modifier may also be applied to global variables. When this is done, it causes that variable’s scope to be restricted to the file in which it is declared.

In C programming, when static is used on a class data member, it causes only one copy of that member to be shared by all objects of its class.

You may not understand this example at this time because I have used function and global variables, which I have not explained so far. So for now let us proceed even if you do not understand it completely. When the above code is compiled and executed, it produces the following result:

The following another C program demonstrates the visibility level of static variables.

The extern storage class is used to give a reference of a global variable that is visible to ALL the program files. When you use ‘extern’, the variable cannot be initialized as all it does is point the variable name at a storage location that has been previously defined.

The extern modifier is most commonly used when there are two or more files sharing the same global variables or functions as explained below.

Here, extern keyword is being used to declare count in the second file whereas it has its definition in the first file, main.c. Now, compile these two files as follows:

This will produce a.out executable program when this program is executed, it produces the following result:

So the above discussed are the most common storage classes in C Programming Language, which every programmer must know.

Declarations whose storage class specifier as typedef do not declare objects; instead, they define identifiers that name types. These identifiers are called typedef names.

A typedef declaration attributes a type to each name among its declarators in the usual way. Thereafter, each such typedef name is syntactically equivalent to a type specifier keyword for the associated type.

are legal declarations. The type of b is long, that of bp is “pointer to long,” and that of z is the specified structure; zp is a pointer to such a structure.

typedef does not introduce new types, only synonyms for types that could be specified in another way. In the example, b has the same type as any other long object.

Typedef names may be redeclared in an inner scope, but a non-empty set of type specifiers must be given.

does not redeclare Blockno, but