Nylon. In the early 1930s Wallace Carothers and his team of chemists at Dupont were investigating synthetic fibers in order to find a synthetic alternative to silk. One promising candidate was formed from the reaction of adipic acid with hexamethylenediamine and was called fiber 66 because each monomer-containing unit had six carbons. It formed a strong, elastic, largely insoluble fiber with a relatively high melting temperature. DuPont chose this material for production. Such polyamides were given the name “nylons”; thus was born nylon 6,6. 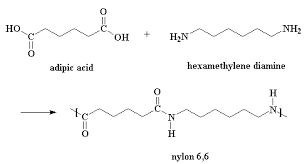 Poly(vinyl chloride). While PVC was initially formed by German chemist Eugen Baumann in 1872, scientists at B. F. Goodrich discovered in 1926 how to make sheets and adhesives from it, starting the “vinyl age.” PVC’s many applications include water pipes and joints, building materials, food packaging, wire insulation, and medical components.

Polystyrene. While polystyrene was probably first formed by German apothecary Eduard Simon in 1839, it was almost 100 years later, in 1930, that the German chemical company I. G. Fraben placed polystyrene on the market. Polystyrene-molded parts became common place by 1935. Applications of polystyrene include loose-fill packaging “peanuts,” shape-molded packaging, and disposable utensils.

Polyacrylonitrile. Rohm and Haas Company bought out Plexiglas (polyacrylonitrile [Figure 18]; also known as acrylic and as a fiber sold under tradenames such as Orlon) from a British firm in 1935 and began production of clear plastic parts and goods, including replacements for glass in camera lenses, aircraft windows, clock faces, and car tail lights. 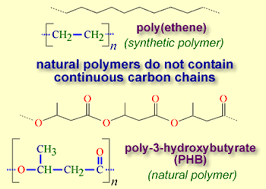 Starch is a condensation polymer made up of hundreds of glucose monomers, which split out water molecules as they chemically combine. Starch is a member of the basic food group carbohydrates and is found in cereal grains and potatoes. It is also referred to as a polysaccharide, because it is a polymer of the monosaccharide glucose. Starch molecules include two types of glucose polymers, amylose and amylopectin, the latter being the major starch component in most plants, making up about three-fourths of the total starch in wheat flour. Amylose is a straight chain polymer with an average of about 200 glucose units per molecule.