Construction of Diagonal and Vernier scales

Construction of Diagonal and Vernier scales

3.Enlarging scale: In some cases when the objects are very small like inside parts of a wrist watch, the dimensions adopted on the drawing will be bigger than the actual dimensions of the objects then in that case it is represented by scale and RF as
Scale: – 10cm=1cm or 10:1 and by R.F= 10/1 (greater than one)

Note: The scale or R.F of a drawing is given usually below the drawing. If the scale adopted is common for all drawings on that particular sheet, then it is given commonly for all figures under the title of sheet.

Types of Scales and their constructions:

When an unusual proportion is to be adopted and when the ready made scales are not available then the required scale is to be constructed on the drawing sheet itself. To construct the scale the data required is 1) the R.F of the scale 2) The units which it has to represent i.e. millimetres or centimetres or metres or kilometres in M.K.S or inches or feet or yards or miles in F.P.S) The maximum length which it should measure. If the maximum length is not given, some suitable length can be assumed.

This should be generally of 15 to 20 cms length. 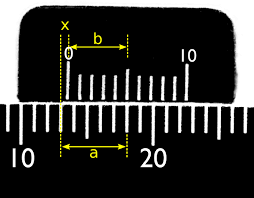 Plain Scales: Plain scales read or measure upto two units or a unit and its sub-division, for example centimetres (cm) and millimetres (mm). When measurements are required upto first decimal, for example 2.3 m or 4.6 cm etc. It consists of a line divided into number of equal main parts and the first main part is sub-divided into smaller parts. Mark zero (O) at the end of the first main part. From zero mark numbers to the main parts or units towards right and give numbers to the sub-divisions or smaller parts towards left. Give the names of the units and sub-units below clearly. Indicate below the name of the scale and its R.F clearly.

The construction of the plain scale is explained below by a worked example.

Draw a straight line of 20cm length and divide into 6 equal parts.

Note: Assume height of the plain scale as 1 cm.

Construct a plain scale of 1:5 to show decimeters and centimeters and to read upto 1 metre. Show the length of 7.4 decimetres on it.

Draw a straight line of 20cm length and divide into 10 equal parts.

gs and yards etc. This scale is used when very small distances such as 0.1 mm are to be accurately measured or when measurements are required upto second decimal.

Small divisions of short lines are obtained by the principle of diagonal division, as explained below:

Principle of diagonal scale: To divide a given line AB into small divisions in multiples of 1/10 its length for example 0.1AB; 0.2AB etc. as shown in

Thus each horizontal line below AB will be shorter by (1/10)AB, giving lengths in multiples of 0.1AB

An area of 144 sqcm on a map represents an area of 9 sqkm on the field. Find the R.F.of the scale for this map and draw a diagonal scale to show kilometers, hectametres and decameters and to measure upto 5 kilometres. Indicate on the scale a distance of 3 kilometres, 5 hectametres and 6 decametres or 3.56km.

Note: Assume the height of the diagonal scale AD as 5cm for dividing it into 10 equal parts conveniently.