Black-body radiation is the type of electromagnetic radiation within or surrounding a body in thermodynamic equilibrium with its environment, or emitted by a black body (an opaque and non-reflective body) held at constant, uniform temperature. The radiation has a specific spectrum and intensity that depends only on the temperature of the body. 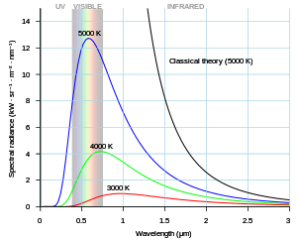 The thermal radiation spontaneously emitted by many ordinary objects can be approximated as black body radiation. A perfectly insulated enclosure that is in thermal equilibrium internally contains black-body radiation and will emit it through a hole made in its wall, provided the hole is small enough to have negligible effect upon the equilibrium.

A black-body at room temperature appears black, as most of the energy it radiates is infra-red and cannot be perceived by the human eye. Because the human eye cannot perceive color at very low light intensities, a black body, viewed in the dark at the lowest just faintly visible temperature, subjectively appears grey (but only because the human eye is sensitive only to black and white at very low intensities – in reality, the frequency of the light in the visible range would still be red, although the intensity would be too low to discern as red), even though its objective physical spectrum peaks in the infrared range.When it becomes a little hotter, it appears dull red. As its temperature increases further it eventually becomes blindingly brilliant blue-white.

Although planets and stars are neither in thermal equilibrium with their surroundings nor perfect black bodies, black-body radiation is used as a first approximation for the energy they emit. Black holes are near-perfect black bodies, in the sense that they absorb all the radiation that falls on them. It has been proposed that they emit black-body radiation (called Hawking radiation), with a temperature that depends on the mass of the black hole.However, the zero principle of thermodynamics requires thermal equilibrium of any two subsystems to imply the equality of temperatures, not of their masses.