RAID or Redundant Array of Independent Disks, is a technology to connect multiple secondary storage devices and use them as a single storage media.

RAID consists of an array of disks in which multiple disks are connected together to achieve different goals. RAID levels define the use of disk arrays.

In this level, a striped array of disks is implemented. The data is broken down into blocks and the blocks are distributed among disks. Each disk receives a block of data to write/read in parallel. It enhances the speed and performance of the storage device. There is no parity and backup in Level 0.

RAID 1 uses mirroring techniques. When data is sent to a RAID controller, it sends a copy of data to all the disks in the array. RAID level 1 is also called mirroring and provides 100% redundancy in case of a failure.

RAID 2 records Error Correction Code using Hamming distance for its data, striped on different disks. Like level 0, each data bit in a word is recorded on a separate disk and ECC codes of the data words are stored on a different set disks. Due to its complex structure and high cost, RAID 2 is not commercially available.

RAID 3 stripes the data onto multiple disks. The parity bit generated for data word is stored on a different disk. This technique makes it to overcome single disk failures.

In this level, an entire block of data is written onto data disks and then the parity is generated and stored on a different disk. Note that level 3 uses byte-level striping, whereas level 4 uses block-level striping. Both level 3 and level 4 require at least three disks to implement RAID.

RAID 5 writes whole data blocks onto different disks, but the parity bits generated for data block stripe are distributed among all the data disks rather than storing them on a different dedicated disk.

RAID 6 is an extension of level 5. In this level, two independent parities are generated and stored in distributed fashion among multiple disks. Two parities provide additional fault tolerance. This level requires at least four disk drives to implement RAID. 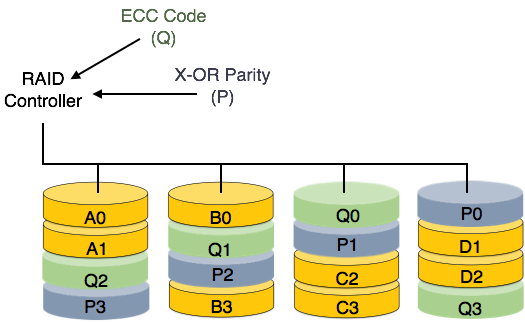