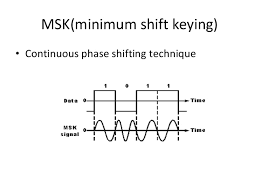 In digital modulation, minimum-shift keying (MSK) is a type of continuous-phase frequency-shift keying that was developed in the late 1950s and 1960s.Similar to OQPSK, MSK is encoded with bits alternating between quadrature components, with the Q component delayed by half the symbol period. However, instead of square pulses as OQPSK uses, MSK encodes each bit as a half sinusoid. This results in a constant-modulus signal (constant envelope signal), which reduces problems caused by non-linear distortion. In addition to being viewed as related to OQPSK, MSK can also be viewed as a continuous phase frequency shift keyed (CPFSK) signal with a frequency separation of one-half the bit rate.

In MSK the difference between the higher and lower frequency is identical to half the bit rate. Consequently, the wave forms used to represent a 0 and a 1 bit differ by exactly half a carrier period. Thus, the maximum frequency deviation is

= 0.25 fm where fm is the maximum modulating frequency. As a result, the modulation index m is 0.5. This is the smallest FSK modulation index that can be chosen such that the wave forms for 0 and 1 are orthogonal. A variant of MSK called GMSK is used in the GSM mobile phone standard.

The resulting signal is represented by the formula

encode the even and odd information respectively with a sequence of square pulses of duration 2T.

has its pulse edges on

. The carrier frequency is

Using the trigonometric identity, this can be rewritten in a form where the phase and frequency modulation are more obvious,

and -1 if they are of opposite signs, and

otherwise. Therefore, the signal is modulated in frequency and phase, and the phase changes continuously and linearly.