The objective of a data warehouse is to make large amounts of data easily accessible to the users, hence allowing the users to extract information about the business as a whole. But we know that there could be some security restrictions applied on the data that can be an obstacle for accessing the information. If the analyst has a restricted view of data, then it is impossible to capture a complete picture of the trends within the business.

The data from each analyst can be summarized and passed on to management where the different summaries can be aggregated. As the aggregations of summaries cannot be the same as that of the aggregation as a whole, it is possible to miss some information trends in the data unless someone is analyzing the data as a whole.

This situation arises when the future users and the data sources are not well known. In such a situation, we need to use the knowledge of business and the objective of data warehouse to know likely requirements.

The following activities get affected by security measures:

The following two approaches can be used to classify the data:

The following approaches can be used to classify the users:

Classification on basis of Department

Let’s have an example of a data warehouse where the users are from sales and marketing department. We can have security by top-to-down company view, with access centered on the different departments. But there could be some restrictions on users at different levels. This structure is shown in the following diagram. 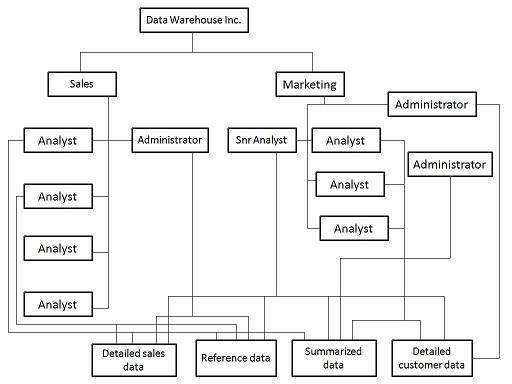 But if each department accesses different data, then we should design the security access for each department separately. This can be achieved by departmental data marts. Since these data marts are separated from the data warehouse, we can enforce separate security restrictions on each data mart. This approach is shown in the following figure. 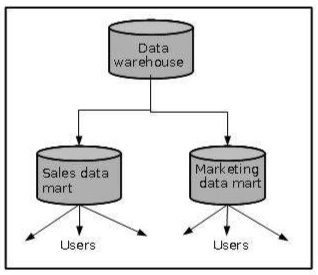 Classification on basis of Role

Auditing is a subset of security, a costly activity. Auditing can cause heavy overheads on the system. To complete an audit in time, we require more hardware and therefore, it is recommended that wherever possible, auditing should be switched off. Audit requirements can be categorized as follows:

Note : For each of the above-mentioned categories, it is necessary to audit success, failure, or both. From the perspective of security reasons, the auditing of failures are very important. Auditing of failure is important because they can highlight unauthorized or fraudulent access.

These restrictions need to be considered carefully. Following are the points to remember:

There exist potential security implications while moving the data. Suppose we need to transfer some restricted data as a flat file to be loaded. When the data is loaded into the data warehouse, the following questions are raised:

If we talk about the backup of these flat files, the following questions are raised:

Some other forms of data movement like query result sets also need to be considered. The questions raised while creating the temporary table are as follows:

The audit and security requirements need to be properly documented. This will be treated as a part of justification. This document can contain all the information gathered from:

Impact of Security on Design

Security affects the overall application development and it also affects the design of the important components of the data warehouse such as load manager, warehouse manager, and query manager. The load manager may require checking code to filter record and place them in different locations. More transformation rules may also be required to hide certain data. Also there may be requirements of extra metadata to handle any extra objects.

To create and maintain extra views, the warehouse manager may require extra codes to enforce security. Extra checks may have to be coded into the data warehouse to prevent it from being fooled into moving data into a location where it should not be available. The query manager requires the changes to handle any access restrictions. The query manager will need to be aware of all extra views and aggregations.