CDMA is an example of multiple access, where several transmitters can send information simultaneously over a single communication channel. This allows several users to share a band of frequencies. To permit this without undue interference between the users, CDMA employs spread-spectrum technology and a special coding scheme (where each transmitter is assigned a code). 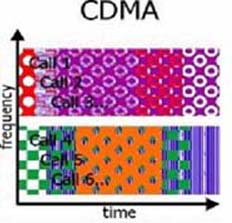 Multipath fading may be substantially reduced because of large signal bandwidth