In the cellular concept, frequencies allocated to the service are re-used in a regular pattern of areas, called ‘cells’, each covered by one base station. In mobile-telephone nets these cells are usually hexagonal. In radio broadcasting, a similar concept has been developed based on rhombic cells.

The total bandwidth for the system is C times the bandwidth occupied by a single cell.

Frequency reuse was implemented by restructuring the mobile telephone system architecture into the cellular concept.

The concept of frequency reuse is based on assigning to each cell a group of radio channels used within a small geographic area. Cells are assigned a group of channels that is completely different from neighbouring cells. The coverage area of cells is called the footprint. This footprint is limited by a boundary so that the same group of channels can be used in different cells that are far enough away from each other so that their frequencies do not interfere.

Cells with the same number have the same set of frequencies. Here, because the number of available frequencies is 7, the frequency reuse factor is 1/7. That is, each cell is using 1/7 of available cellular channels.

One way to increase to subscriber capacity of a cellular network is replace the omnidirectional antenna at each base station by three (or six) sector antennas of 120 (or 60) degrees opening.

Each sector can be considered as a new cell, with its own (set of) frequency channel(s). 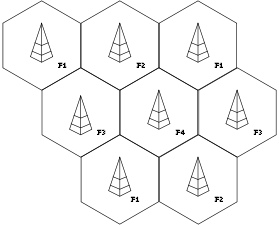 The base station can either be located at

The use of directional sector antennas substantially reduces the interference among co-channel cells. This allows denser frequency reuse.

Sectorization is less expensive than cell-splitting, as it does not require the acquisition of new base station sites.