Bulk polymerization is carried out in the absence of any solvent or dispersant and is thus the simplest in terms of formulation. It is used for most step-growth polymers and many types of chain-growth polymers. In the case of chain-growth reactions, which are generally exothermic, the heat evolved may cause the reaction to become too vigorous and difficult to control unless efficient cooling. Bulk polymerization has several advantages over other methods, these advantages are

For reducing the disadvantages of bulk polymerization, the process can be carried out in a solution. This is known as solution polymerization.

Polymer characterization is the analytical branch of polymer science.

Emulsion polymerization is a type of radical polymerization that usually starts with an emulsion incorporating water, monomer, and surfactant. The most common type of emulsion polymerization is an oil-in-water emulsion, in which droplets of monomer (the oil) are emulsified (with surfactants) in a continuous phase of water. Water-soluble polymers, such as certain polyvinyl alcohols or hydroxyethyl celluloses, can also be used to act as emulsifiers/stabilizers. The name “emulsion polymerization” is a misnomer that arises from a historical misconception. Rather than occurring in emulsion droplets, polymerization takes place in the latex particles that form spontaneously in the first few minutes of the process. These latex particles are typically 100 nm in size, and are made of many individual polymer chains. The particles are stopped from coagulating with each other because each particle is surrounded by the surfactant (‘soap’); the charge on the surfactant repels other particles electrostatically. When water-soluble polymers are used as stabilizers instead of soap, the repulsion between particles arises because these water-soluble polymers form a ‘hairy layer’ around a particle that repels other particles, because pushing particles together would involve compressing these chains.

Emulsion polymerization is used to manufacture several commercially important polymers. Many of these polymers are used as solid materials and must be isolated from the aqueous dispersion after polymerization. In other cases the dispersion itself is the end product. A dispersion resulting from emulsion polymerization is often called a latex (especially if derived from asynthetic rubber) or an emulsion (even though “emulsion” strictly speaking refers to a dispersion of an immiscible liquid in water). These emulsions find applications in adhesives, paints, paper coating and textile coatings. They are often preferred over solvent-based products in these applications due to the absence of VOCs (Volatile Organic Compounds) in them. 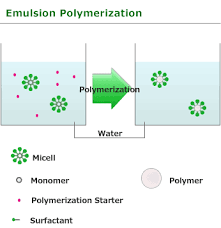 Advantages of emulsion polymerization include:

Disadvantages of emulsion polymerization include:

Solution polymerization is a method of industrial polymerization. In this procedure, a monomer is dissolved in a non-reactive solvent that contains a catalyst.

The reaction results in a polymer which is also soluble in the chosen solvent. Heat released by the reaction is absorbed by the solvent, and so the reaction rate is reduced. Moreover, the viscosity of the reaction mixture is reduced, not allowing auto acceleration at high monomer concentrations. Once the maximum or desired conversion is reached, excess solvent has to be removed in order to obtain the pure polymer. Hence, solution polymerization is mainly used for applications where the presence of a solvent is desired anyway, as is the case for varnish and adhesives. It is not useful for the production of dry polymers because of the difficulty of complete solvent removal.

This process is one of two used in the production of sodium polyacrylate, a super absorbent polymer used in disposable diapers.

Solution polymerization is used to create polymers and copolymers by dissolving a monomer and a catalyst in a non-reactive solvent. During this process, the solvent liquid absorbs the heat generated by the chemical reaction which controls the reaction rate. The liquid solvent used in the solution polymerization procedure usually remains a solvent for the resulting polymer or copolymer. This process is only suitable for the creation of wet polymer types, as the removal of excess solvent is difficult. While the removal of the excess solvent is possible using distillation, it is usually not considered economically possible in an industrial situation.

The solvents used in the solution polymerization procedure must be chosen carefully. A solvent that is non-reactive to the monomer is essential to the process. If a reactive solvent is used, dangerous chain reaction processes or other undesirable effects can occur as a result of auto acceleration. Auto acceleration is a reaction that occurs when the heat produced by polymerization does not dissipate quickly enough by the solvent. As the heat builds up, the viscosity of the solution increases, causing the polymerization process to accelerate beyond safe control.

Industrial solution polymerization processes are commonly used to produce polymers with special characteristics. The chemical reaction that takes place between the monomer and catalyst can lend unique properties to the end product. One example of this type of polymer is sodium polyacrylate, the exceptionally absorbent polymer used in disposable diapers.

While this process is not generally feasible for dry polymers, it works well for wet polymer types. The process of industrial solution polymerization is used to create polymers and copolymers that can be used in their solution form. Examples of this usage include industrial glues and surface coatings.

Synthetic elastomers can also be produced using the solution polymerization process. This method produces a more precise polymer than emulsion polymerization methods. By controlling the addition of refined monomers to the catalyst-solvent solution, the resulting polymers can be carefully designed for specific properties. These synthetic elastomers are commonly found in products such as latex gloves, neoprene wetsuits and floor covering materials.

Suspension polymerization is used only in free radical type processes. The monomer is mechanically dispersed in a media, usually water. There are cases where an organic media is used in which neither the polymer nor the monomer is soluble in the organic media.

For suspension polymerization, there are two phases, water and organic, and the starting point may be 10 parts of the former, and 1 part of the latter. The initiator used can be water soluble or organic soluble [benzoyl peroxide, AIBN, or (NH4)2(SxO4)y.] Usually the initiator is organic soluble. 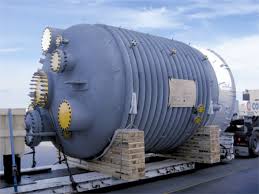 A suspension agent is a material that gives a surface activation that keeps droplets from become larger (droplets coming together to form larger droplets is called coalescence.)

I think the term coalescence is also used for when the polymer molecules in a solution come together as the solvent evaporates, an example of which is the film formation that occurs for a paint system.

There is efficient heat transfer with speed or bulk process.

Recovery of product by mechanical separation (i.e, filtration, washing) is a lot cheaper than thermo distillation. (this sentence sort of doesn’t make sense.)

Learn More About The Degree of Polymerization