If a collection of atoms are in the excited state, spontaneous decay events to the ground state will occur at a rate proportional to N2, the number of atoms in the excited state. The energy difference between the two states ΔE21 is emitted from the atom as a photon of frequency ν21 as given by the frequency-energy relation above.

The photons are emitted stochastically, and there is no fixed phase relationship between photons emitted from a group of excited atoms; in other words, spontaneous emission is incoherent. In the absence of other processes, the number of atoms in the excited state at time t, is given by

where N2(0) is the number of excited atoms at time t = 0, and τ21 is the lifetime of the transition between the two states.

If an atom is already in the excited state, it may be perturbed by the passage of a photon that has a frequency ν21corresponding to the energy gap ΔE of the excited state to ground state transition. In this case, the excited atom relaxes to the ground state, and is induced to produce a second photon of frequency ν21. The original photon is not absorbed by the atom, and so the result is two photons of the same frequency. This process is known as stimulated emission.

Specifically, an excited atom will act like a small electric dipole which will oscillate with the external field provided. One of the consequences of this oscillation is that it encourages electrons to decay to the lowest energy state. When this happens due to the presence of the electromagnetic field from a photon, a photon is released in the same phase and direction as the “stimulating” photon, and is called stimulated emission. 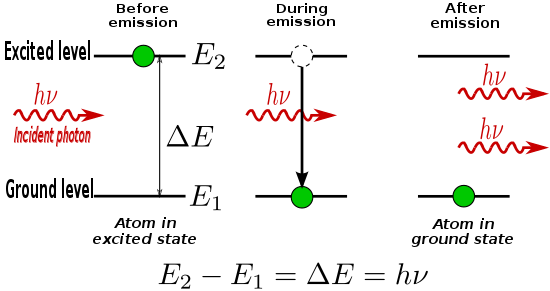 The critical detail of stimulated emission is that the induced photon has the same frequency and phase as the incident photon. In other words, the two photons are coherent. It is this property that allows optical amplification, and the production of a laser system. During the operation of a laser, all three light-matter interactions described above are taking place. Initially, atoms are energized from the ground state to the excited state by a process called pumping, described below. Some of these atoms decay via spontaneous emission, releasing incoherent light as photons of frequency, ν. These photons are fed back into the laser medium, usually by an optical resonator. Some of these photons are absorbed by the atoms in the ground state, and the photons are lost to the laser process. However, some photons cause stimulated emission in excited-state atoms, releasing another coherent photon. In effect, this results in optical amplification.

Recall from the descriptions of absorption and stimulated emission above that the rates of these two processes are proportional to the number of atoms in the ground and excited states, N1 and N2, respectively. If the ground state has a higher population than the excited state (N1 > N2), the process of absorption dominates and there is a net attenuation of photons. If the populations of the two states are the same (N1 = N2), the rate of absorption of light exactly balances the rate of emission; the medium is then said to be optically transparent.

If the higher energy state has a greater population than the lower energy state (N1 < N2), then the emission process dominates, and light in the system undergoes a net increase in intensity. It is thus clear that to produce a faster rate of stimulated emissions than absorptions, it is required that the ratio of the populations of the two states is such that N2/N1 > 1; In other words, a population inversion is required for laser operation.