The common metals—iron, copper, zinc, lead, tin, aluminium, antimony, magnesium, nickel, manganese, etc., in the pure state provide us with a very limited range of properties, and it is a fact that, apart from the pure copper used for electrical purposes, relatively little metal finds ultimate industrial use in an unalloyed form.

All pure metals in the solid state are essentially crystalline and exhibit to some degree the characteristic properties of elasticity and plastic deformation under varying conditions of stress. Most of the common metals crystallise in one of three simple crystal lattice types, face centred cubic (F.C.C.), body centred cubic (B.C.C.), and close packed hexagonal (C.P.Hex.) These simple crystalline forms allow deformation of the crystals to occur under severe stress, by block-like movement of adjacent sections of the crystals. This movement or slip within the crystals takes place along certain planes of atoms in the lattice. When it occurs it causes a disarrangement of the atoms along the slip plane which increases the resistance to further slip and eventually causes movement in that plane to stop, and, on further increase of stress, slip will occur along another plane until all the potential planes have slipped to their limit. During this process the metal will be plastically deformed and at its completion the resistance of the metal to further deformation will be considerably greater per unit of cross-section than that of the original metal, and we say the metal is work hardened. Such deformation leaves the atoms of the metal in a state of strain, but in many cases this state can be preserved indefinitely at ordinary temperatures. The hardness and strength of many metals can thus be increased by cold working processes, such as cold drawing, rolling, spinning, etc.Significance of Alloying.

The degree of plastic deformation that pure metals will undergo without fracture bears a close relation to their crystal structure, e.g., the metals aluminium, copper, lead, nickel, silver, gold, platinum, rhodium, palladium, iridium which crystallise with a F.C.C. lattice will be recognised as being among the most ductile; lithium, iron, chromium, vanadium, molybdenum, tungsten, tantalum have B.C.C. lattices and are, on the whole, harder and less ductile, while beryllium, magnesium, antimony, bismuth, zinc, titanium and cobalt, which are all relatively hard and brittle, have hexagonal close-packed or rhombohedral hexagonal lattices.

A F.C.C. lattice, therefore, appears to be a very desirable feature in a metal in which the property of ductility is important, as in the cold-forming operations of drawing, forming, rolling, spinning, and we find the pure metals with a F.C.C. lattice—aluminium, copper, lead, silver, gold, platinum—perform very satisfactorily. Their range of other properties such as hardness, strength, and cost is, however, somewhat limited. Alloys have, therefore, been developed which are similarly ductile, but which are cheaper or more suitable in other ways than the pure metals. This can be illustrated by reference to the addition of tin or zinc to copper. When tin or zinc is added to copper, the resulting alloy crystallises with the F.C.C. lattice of copper, the added elements entering at random into the copper lattice forming a solid solution. In entering the lattice the solute atoms cause some distortion of the lattice which offers resistance to slip along the slip planes, and the alloys are therefore harder and stronger. About 10% of tin or 35% of zinc can be added to copper to form single-phase solid-solution types of alloys which have excellent ductility and give a wide range of mechanical properties. 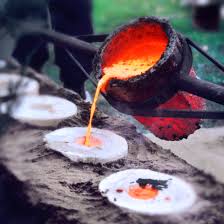 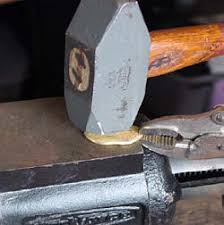 The effect of increased distortion of the copper lattice on tensile strength is evident from the following table which gives the minimum tensile properties required by the appropriate A.S.T.M. specifications for a range of alloys of copper with zinc and tin. The second column shows the increase in strength that can be achieved with the same alloys by the work-hardening process referred to above.

When a mixture of metals crystallises from the liquid state, solid solutions are not always formed. In some cases the constituents are entirely insoluble in the solid state, in which case the properties of the resulting alloy is the sum of the properties of the constituents as in any other mechanical mixture. Sometimes these mixtures may be relatively simple, e.g., in the copper-lead alloys, and sometimes they are complicated by eutectic formation, e.g., lead-antimony alloys. In other cases definite intermetallic compounds may be formed. In combinations of metals it is possible to get all manner of combinations of these structural types each of which has characteristic properties which it confers on alloys. Solid solutions, as we have seen, are relatively soft and ductile; eutectics have low melting points and are inclined to be brittle—their low melting points make them suitable for soldering and brazing alloys; intermetallic compounds are usually very much harder than their constituent elements and are generally brittle. They lessen the shock resistance, increase compression strength and improve machinability. Significance of Alloying.