All matter can exhibit wave-like behaviour. For example, a beam of electrons can be diffracted just like a beam of light or a water wave. Matter waves are a central part of the theory of quantum mechanics, an example of wave-particle duality. The concept that matter behaves like a wave is also referred to as the de Broglie hypothesis (/dəˈbrɔɪ/) due to having been proposed by Louis de Broglie in 1924. Matter waves are often referred to as de Broglie waves.

The de Broglie wavelength is the wavelength, λ, associated with a particle and is related to its momentum, p, through the Planck constant, h: 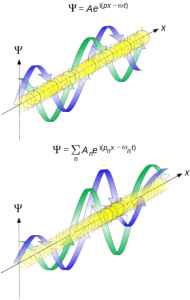 The Wave Properties of Matter:

Since the wave vector k is defined as k=2πλ, we can rewrite this equation as

p=ℏk
The validity of de Broglie’s proposal was confirmed by electron diffraction experiments of G.P. Thomson in 1926 and of C. Davisson and L. H. Germer in 1927. In these experiments, it was found that electrons were scattered from atoms in a crystal and that these scattered electrons produced an interference pattern. The interference pattern was just like that produced when water waves pass through two holes in a barrier to generate separate wavefronts that combine and interfere with each other. These diffraction patterns are characteristic of wave-like behaviour and are exhibited by both electrons and electromagnetic radiation. Diffraction patterns are obtained if the wavelength is comparable to the spacing between scattering centres. Immediately below in the box are two hyperlinks that show you patterns obtained by electron diffraction and by x-ray diffraction. You can find others on the Internet by searching x-ray diffraction pattern and electron diffraction pattern to see how electron and x-ray diffraction are being used in modern research.
De Broglie’s proposal can be applied to Bohr’s view of the hydrogen atom to show why angular momentum is quantized in units of ħ. If the electron in the hydrogen atom is orbiting the nucleus in a stable orbit, then it should be described by a stable or stationary wave. Such a wave is called a standing wave. In a standing wave, the maximum and minimum amplitudes (crests and troughs) of the wave and the nodes (points where the amplitude is zero) are always found at the same position. In a travelling wave the crests, troughs, and nodes move from one position to another as a function of time. To place a standing wave in the shape of a round orbit, the circumference 2πr must be an integer multiple of the wavelength, i.e.
2πr=nλ

Since rp equals the angular momentum, we have

By saying the electron has the property of a standing wave around the orbit, we are led to the conclusion that angular momentum of the electron is quantized in units of ħ. The assumption of quantization thereby is replaced by the postulate that particles have wave properties characterized by a wavelength λ=ℏp, and quantization is a consequence of this new postulate.

Following are a few properties of matter waves: