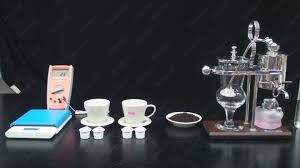 Temperature difference in any situation results from energy flow into a system or energy flow from a system to surroundings. The former leads to heating, whereas latter leads to cooling of an object.
Newton’s Law of Cooling states that the rate of temperature of the body is proportional to the difference between the temperature of the body and that of the surrounding medium. This statement leads to the classic equation of exponential decline over time which can be applied to many phenomena in science and engineering, including the discharge of a capacitor and the decay in radioactivity.

Suppose that a body with initial temperature T1°C, is allowed to cool in air which is maintained at a constant temperature T2°C.
Let the temperature of the body be T°C at time t.

Then by Newton’s Law of Cooling,

The constant ‘k’ depends upon the surface properties of the material being cooled.
Initial condition is given by T=T1 at t=0
Solving (1)

Substituting the value of C in equation (2) gives

Or we can say that the temperature of the body approaches that of its surroundings as time goes.

The graph drawn between the temperature of the body and time is known as cooling curve. The slope of the tangent to the curve at any point gives the rate of fall of temperature.

Example of Newton’s Law of Cooling:

This kind of cooling data can be measured and plotted and the results can be used to compute the unknown parameter k. The parameter can sometimes also be derived mathematically.

Thermal conductivity (denotes k, λ, or κ) is the property of a material to conduct heat. Evaluated primarily in terms...