Nd-YAG (neodymium-doped yttrium aluminium garnet; Nd:Y3Al5O12) is acrystal that is used as a lasing medium for solid-state lasers. The dopant, triply ionized neodymium, Nd(III), typically replaces a small fraction (1%) of the yttrium ions in the host crystal structure of the yttrium aluminium garnet (YAG), since the two ions are of similar size. It is the neodymium ion which provides the lasing activity in the crystal, in the same fashion as red chromium ion in ruby lasers.

Nd-YAG laser operate in both pulsed and continuous mode. Pulsed Nd-YAG laser are typically operated in the so-called Q-switching mode: An optical switch is inserted in the laser cavity waiting for a maximum population inversionin the neodymium ions before it opens. Then the light wave can run through the cavity, depopulating the excited laser medium at maximum population inversion. In this Q-switched mode, output powers of 250 megawatts and pulse durations of 10 to 25 nanoseconds have been achieved. The high-intensity pulses may be efficiently frequency doubled to generate laser light at 532 nm, or higher harmonics at 355 and 266 nm. 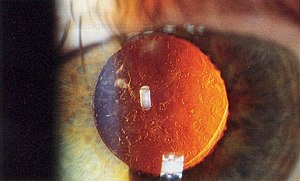 Nd:YAG lasers are used in ophthalmology to correct posterior capsular opacification, a condition that may occur after cataract surgery, and for peripheral iridotomy in patients with acute angle-closure glaucoma, where it has superseded surgical iridectomy. Frequency-doubledNd:YAG lasers (wavelength 532 nm) are used for pan-retinalphotocoagulation in patients with diabetic retinopathy.

Nd-YAG laser emitting light at 1064 nm have been the most widely used laser for laser-induced thermotherapy, in which benign or malignant lesions in various organs are ablated by the beam.

In oncology, Nd:YAG lasers can be used to remove skin cancers.They are also used to reduce benign thyroid nodules, and to destroy primary and secondary malignant liver lesions.

To treat benign prostatic hyperplasia (BPH), Nd:YAG lasers can be used for laser prostate surgery—a form of transurethral resection of the prostate.

These lasers are also used extensively in the field of cosmetic medicine for laser hair removal and the treatment of minorvascular defects such as spider veins on the face and legs. Recently used for dissecting cellulitis, a rare skin disease usually occurring on the scalp.

Using hysteroscopy the Nd:YAG laser has been used for removal of uterine septa within the inside of the uterus.

In podiatry, the Nd:YAG laser is being used to treat onychomycosis, which is fungus infection of the toenail. The merits of laser treatment of these infections are not yet clear, and research is being done to establish effectiveness.

Nd-YAG laser are used in manufacturing for engraving, etching, or marking a variety of metals and plastics, or for metal surface enhancement processes like laser peening. They are extensively used in manufacturing for cutting and welding steel, semiconductors and various alloys. For automotive applications (cutting and welding steel) the power levels are typically 1–5 kW. Super alloy drilling (for gas turbine parts) typically uses pulsed Nd-YAG laser (millisecond pulses, not Q-switched). Nd:YAG lasers are also employed to make subsurface markings in transparent materials such as glass or acrylic glass. Lasers of up to 400 W are used for selective laser melting of metals in additive layered manufacturing. In aerospace applications, they can be used to drill cooling holes for enhanced air flow/heat exhaust efficiency.

Laser peening typically uses high energy (10 to 40 Joule), 10 to 30 nanosecond pulse, flashed laser systems to generate gigawatts of power on the surface of a part by focusing the laser beam down to a few millimeters in diameter. Laser peening is unlike the other manufacturing processes described here in that it neither heats or adds material, it is a mechanical process cold working the metallic component to impart compressive residual stresses. Laser peening is widely used in gas fired turbine engines in both aerospace and power generation for component damage tolerance improvement and fatigue life and strength increase