Materials come in different shapes and forms, these lead to different application opportunities. Nanowires can be regarded as a new form of matter. As an example silicon has three well studied and known forms: single crystal, polycrystalline and amorphous silicon – with the three forms having different properties and thus different application opportunities. A silicon Nanonet, in turn can be regarded as the fourth form, with unique properties and applications on it’s own right.

A nanowires is an extremely thin wire with a diameter on the order of a few nanometer s (nm) or less, where 1 nm = 10 -9 meters. Two processes in nanotechnology by which nanowires can be manufactured are suspension and deposition.

A suspended nanowire is held up by the ends in an evacuated chamber, and then is chemically etched or bombarded with high-speed atom s or molecule s to reduce its diameter. Another method involves indenting the surface of a wire in the center of a suspended span, raising the temperature, and then stretching the wire while it is near its melting point. A deposited nanowire is fabricated on a surface consisting of some non-conducting substance such as plastic or glass. The process is similar to that by which semiconductor chips are grown, except that the result is a linear (one-dimensional) structure rather than a flat (two-dimensional) or solid (three-dimensional) structure. 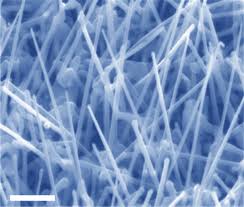 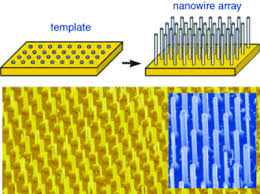 The wires the group is investigating are highly conducting and there is a (tunable) barrier that limits the charge propagation from wire to wire.  At any finite temperature there is a transition from a non-conducting to conducting state at the percolation transition with increasing network density.  Above this critical density, at high temperatures transport proceeds through thermally assisted hopping between barriers, leading to a classical percolation problem, while at low temperatures tunneling between the different segments determines that conducting process, placing such systems in the quantum transport and quantum phase transition limit displaying a quantum (localization) phase transition with increasing network density. Thus the three states of such system are non-conducting (below the percolation threshold at NP), localized (above NP but below the localization transition NQ) and delocalized at densities above NQ

Nanonets also offer ample application opportunities, ranging from printed electronics and power storage. In addition, in combination with other materials, applications in diverse areas, from optoelectronics to sensors arise. The group is at the forefront of research in this area.