Nanoparticle research is currently an area of intense scientific interest due to a wide variety of potential applications in biomedical, optical and electronic fields.The National Nanotechnology Initiative has led to generous public funding for nanoparticle research in the United States.

Nanoparticles are of great scientific interest as they are, in effect, a bridge between bulk materials and atomic or molecular structures. A bulk material should have constant physical properties regardless of its size, but at the nano-scale size-dependent properties are often observed. Thus, the properties of materials change as their size approaches the nanoscale and as the percentage of atoms at the surface of a material becomes significant. For bulk materials larger than one micrometer (or micron), the percentage of atoms at the surface is insignificant in relation to the number of atoms in the bulk of the material. The interesting and sometimes unexpected properties of nanoparticles are therefore largely due to the large surface area of the material, which dominates the contributions made by the small bulk of the material.

Nanoparticles often possess unexpected optical properties as they are small enough to confine their electrons and produce quantum effects.For example gold nanoparticles appear deep-red to black in solution. Nanoparticles of yellow gold and grey silicon are red in color. Gold nanoparticles melt at much lower temperatures (~300 °C for 2.5 nm size) than the gold slabs (1064 °C);. Absorption of solar radiation is much higher in materials composed of nanoparticles than it is in thin films of continuous sheets of material. In both solar PV and solar thermal applications, controlling the size, shape, and material of the particles, it is possible to control solar absorption.

Other size-dependent property changes include quantum confinement in semiconductor particles, surface plasmon resonance in some metal particles and superparamagnetism in magnetic materials. What would appear ironic is that the changes in physical properties are not always desirable. Ferromagnetic materials smaller than 10 nm can switch their magnetisation direction using room temperature thermal energy, thus making them unsuitable for memory storage.

Suspensions of nanoparticles are possible since the interaction of the particle surface with the solvent is strong enough to overcome density differences, which otherwise usually result in a material either sinking or floating in a liquid.

The high surface area to volume ratio of nanoparticles provides a tremendous driving force for diffusion, especially at elevated temperatures. Sintering can take place at lower temperatures, over shorter time scales than for larger particles. In theory, this does not affect the density of the final product, though flow difficulties and the tendency of nanoparticles to agglomerate complicates matters. Moreover, nanoparticles have been found to impart some extra properties to various day to day products. For example, the presence of titanium dioxide nanoparticles imparts what we call the self-cleaning effect, and, the size being nano-range, the particles cannot be observed. Zinc oxide particles have been found to have superior UV blocking properties compared to its bulk substitute. This is one of the reasons why it is often used in the preparation of sunscreen lotions, and is completely photostable.

Clay nanoparticles when incorporated into polymer matrices increase reinforcement, leading to stronger plastics, verifiable by a higher glass transition temperature and other mechanical property tests. These nanoparticles are hard, and impart their properties to the polymer (plastic). Nanoparticles have also been attached to textile fibers in order to create smart and functional clothing.

Metal, dielectric, and semiconductor nanoparticles have been formed, as well as hybrid structures (e.g., core–shell nanoparticles). Nanoparticles made of semiconducting material may also be labeled quantum dots if they are small enough (typically sub 10 nm) that quantization of electronic energy levels occurs. Such nanoscale particles are used in biomedical applications as drug carriers or imaging agents. 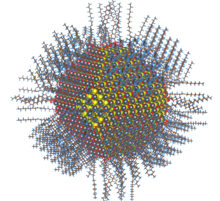 Semi-solid and soft nanoparticles have been manufactured. A prototype nanoparticle of semi-solid nature is the liposome. Various types of liposome nanoparticles are currently used clinically as delivery systems for anticancer drugs and vaccines.

Nanoparticles with one half hydrophilic and the other half hydrophobic are termed Janus particles and are particularly effective for stabilizing emulsions. They can self-assemble at water/oil interfaces and act as solid surfactants.