In physics, the Rayleigh Jeans law attempts to describe the spectral radiance of electromagnetic radiation at all wavelengths from a black body at a given temperature through classical arguments. For wavelength λ, it is:

where c is the speed of light, kB is the Boltzmann constant and T is the temperature in kelvins. For frequency ν, the expression is instead

The Rayleigh Jeans law agrees with experimental results at large wavelengths (low frequencies) but strongly disagrees at short wavelengths (high frequencies). This inconsistency between observations and the predictions of classical physics is commonly known as the ultraviolet catastrophe, and its resolution was a foundational aspect of the development of quantum mechanics in the early 20th century. 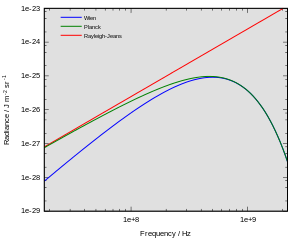 where h is the Planck constant and kB the Boltzmann constant. The Planck law does not suffer from an ultraviolet catastrophe, and agrees well with the experimental data, but its full significance (which ultimately led to quantum theory) was only appreciated several years later. Since,

then in the limit of very high temperatures or long wavelengths, the term in the exponential becomes small, and the exponential is well approximated with the Taylor polynomial’s first-order term,

This results in Planck’s blackbody formula reducing to

which is identical to the classically derived Rayleigh–Jeans expression.

The same argument can be applied to the blackbody radiation expressed in terms of frequency ν = c/λ. In the limit of small frequencies, that is

This last expression is the Rayleigh–Jeans law in the limit of small frequencies.