Sample Problem: 1
Draw the Isometric Projection  of a hexagonal pyramid of side of base 30 mm and height 75 mm, when it is resting on HP such that an edge os the base is parallel to VP.

Solution for Isometric Projection of Pyramids: 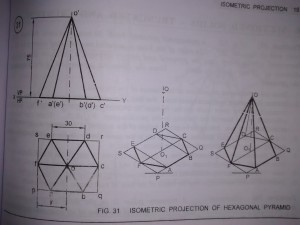