Internal conversion is a transition from a higher to a lower electronic state in a molecule or atom. It is sometimes called “radiation less de-excitation”, because no photons are emitted. It differs from intersystem crossing in that, while both are radiationless methods of de-excitation, the molecular spin state for internal conversion remains the same, whereas it changes for inter-system crossing. The energy of the electronically excited state is given off to vibrational modes of the molecule. The excitation energy is transformed into heat. 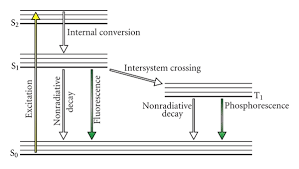 A classic example of this process is the quinine sulfate fluorescence, which can be quenched by the use of various halide salts. The excited molecule can de-excite by increasing the thermal energy of the surrounding solvated ions.

Both melanin and DNA have internal conversion rates that are many orders of magnitude faster than any man-made molecule.

In applications that make use of bimolecular electron transfer the internal conversion is undesirable. For example it is advantageous to have a long lived excited states in Grätzel cells (Dye-sensitized solar cells).