The Grotthus–Draper law (also called the Principle of Photochemical Activation) states that only that light which is absorbed by a system can bring about a photochemical change. Materials such as dyes and phosphors must be able to absorb “light” at optical frequencies. This law provides a basis for fluorescence and phosphorescence. The law was first proposed in 1817 by Theodor Grotthuss and in 1842, independently, by John William Draper.

This is considered to be one of the two basic laws of photochemistry. The second law is the Stark–Einstein law, which says that primary chemical or physical reactions occur with each photon absorbed. 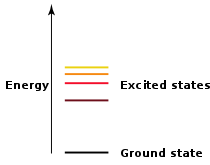 After absorbing energy, an electron may jump from the ground state to a higher energy excited state.

Electron excitation is the movement of an electron to a higher energy state. This can either be done by photoexcitation (PE), where the original electron absorbs the photon and gains all the photon’s energy or by electrical excitation (EE), where the original electron absorbs the energy of another, energetic electron. Within a semiconductor crystal lattice, thermal excitation is a process where lattice vibrations provide enough energy to move electrons to a higher energy band. When an excited electron falls back to a lower energy state again, it is called electron relaxation. This can be done by radiation of a photon or giving the energy to a third spectator particle as well.

Photo excitation is the mechanism of electron excitation by photon absorption, when the energy of the photon is too low to cause photo-ionization. The absorption of the photon takes place in accordance with Planck’s quantum theory.

Laws of Photochemistry The study of chemical reactions, isomerizations and physical behavior that may occur under the influence of visible...