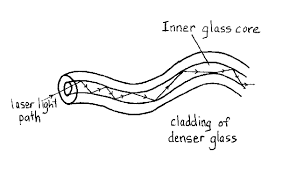 Since the earliest days of telecommunications there has been an ever increasing need to transmit more data even faster. Initially single line wires were used. These gave way to coaxial cables that enabled several channels to transmitted over the same cable. However these systems were limited in bandwidth and optical systems were investigated.

Optical communications became a possibility after the first lasers were developed in the 1960s. The next piece of the jigsaw fell into place when the first optical fibers with a sufficiently low loss for communications purposes were developed in the 1970s. Then, during the late 1970s a considerable amount of research was undertaken. This resulted in the installation of the first optical fibre telecommunications system. It ran over a distance of 45 km and used a wavelength of 0.5 <font=”symbol”>mm and had a data rate of just 45 Mbps – a fraction of what is possible today.

Since then, considerable improvements have been made in the technology. Data rates have improved and in addition to this the performance of the optical fibre has been improved to enable much greater distances to be achieved between repeaters. As an indication of this the speeds that can now be achieved along through a fibre optic system exceed 10 Tbps.

When the first fibre optic transmission systems were being developed, it was thought that the fibre optic cabling and technology would be prohibitively expensive. However, this has not been the case and costs have fallen to the extent that fibre optics now provides the only viable option for many telecommunications applications. In addition to this it is also used in many local area networks where speed is a major requirement.

There are a number of compelling reasons that lead to the widespread adoption of fibre optic cabling for telecommunications applications:

Any fibre optic data transmission system will comprise a number of different elements. There are three major elements (marked in bold), and a further one that is vital for practical systems:

The different elements of the system will vary according to the application. Systems used for lower capacity links, possibly for local area networks will employ somewhat different techniques and components to those used by network providers that provide extremely high data rates over long distances. Nevertheless the basic principles are the same whatever the system.

In the system the transmitter of light source generates a light stream modulated to enable it to carry the data. Conventionally a pulse of light indicates a “1” and the absence of light indicates “0”. This light is transmitted down a very thin fibre of glass or other suitable material to be presented at the receiver or detector. The detector converts the pulses of light into equivalent electrical pulses. In this way the data can be transmitted as light over great distances.

Although the original telecommunications fibre optic systems would have used large lasers, today a variety of semiconductor devices can be used. The most commonly used devices are light emitting diodes, LEDs, and semiconductor laser diodes.

The simplest transmitter device is the LED. Its main advantage is that it is cheap, and this makes it ideal for low cost applications where only short runs are needed. However they have a number of drawbacks. The first is that they offer a very low level of efficiency. Only about 1% of the input power enters the optical fibre, and this means that high power drivers would be needed to provide sufficient light to enable long distance transmissions to be made. The other disadvantage of LEDs is that they produce what is termed incoherent light that covers a relatively wide spectrum. Typically the spectral width is between 30 and 60 nm. This means that any chromatic dispersion in the fibre will limit the bandwidth of the system.

In view of their performance, LEDs are used mainly in local-area-network applications where the data rates are typically in the range 10-100 Mb/s and transmission distances are a few kilometres.

Where higher levels of performance are required, i.e. it is necessary that the fibre optic link can operate over greater distances and with higher data rates, then lasers are used. Although more costly, they offer some significant advantages. In the first instance they are able to provide a higher output level, and in addition to this the light output is directional and this enables a much higher level of efficiency in the transfer of the light into the fibre optic cable. Typically the coupling efficiency into a single mode fibre may be as high as 50%. A further advantage is that lasers have a very narrow spectral bandwidth as a result of the fact that they produce coherent light. This narrow spectral width enables the lasers to transmit data at much higher rates because modal dispersion is less apparent. Another advantage is that semiconductor lasers can be modulated directly at high frequencies because of short recombination time for the carriers within the semiconductor material.

Laser diodes are often directly modulated. This provides a very simple and effective method of transferring the data onto the optical signal. This is achieved by controlling current applied directly to the device. This in turn varies the light output from the laser. However for very high data rates or very long distance links, it is more effective to run the laser at a constant output level (continuous wave). The light is then modulated using an external device. The advantage of using an external means of modulation is that it increases the maximum link distance because an effect known as laser chirp is eliminated. This chirp broadens the spectrum of the light signal and this increases the chromatic dispersion in the fibre optic cable.

The full details and description of fibre optic cabling are found in a separate article / tutorial on this area of the website. In essence a fibre optic cable consists of core, around which is another layer referred to as the cladding. Outside of this there is a protective outer coating.

The fibre optic cables operate because their cladding has a refractive index that is slightly lower than that of the core. This means that light passing down the core undergoes total internal reflection when it reaches the core / cladding boundary, and it is thereby contained within the core of the optical fibre.