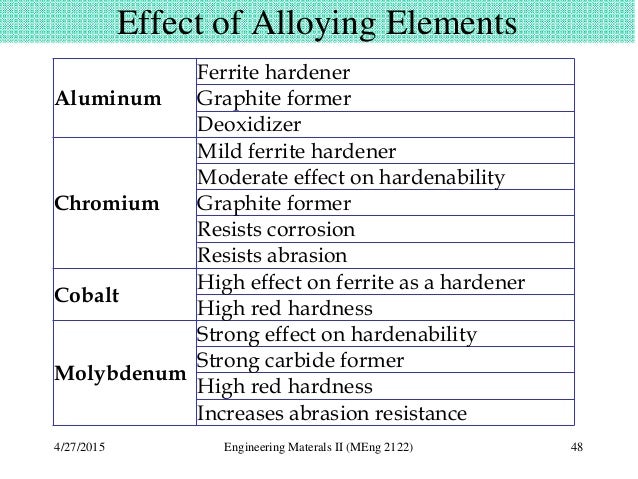 The main reason for adding nickel is to promote an austenitic microstructure. Nickel generally increases ductility and toughness. It also reduces the corrosion rate in the active state and is therefore advantageous in acidic environments. In precipitation hardening steels nickel is also used to form the intermetallic compounds that are used to increase strength. In martensitic grades adding nickel, combined with reducing carbon content, improves weldability.

Molybdenum significantly increases the resistance to both uniform and localized corrosion. It slightly increases mechanical strength and strongly promotes a ferritic microstructure. However, molybdenum also enhances the risk for the formation of secondary phases in ferritic, duplex, and austenitic steels. In martensitic steels it increases the hardness at higher tempering temperatures due to its effect on carbide precipitation.

Copper enhances corrosion resistance to certain acids and promotes an austenitic microstructure. It can also be added to decrease work hardening in grades designed for improved machinability. It may also be added to improve formability.

Silicon increases resistance to oxidation, both at high temperatures and in strongly oxidizing solutions at lower temperatures. It promotes a ferritic microstructure and increases strength.

Titanium is a strong ferrite and carbide former, lowering the effective carbon content and promoting a ferritic structure in two ways. In austenitic steels with increased carbon content it is added to increase the resistance to intergranular corrosion (stabilized grades), but it also increases mechanical properties at high temperatures. In ferritic grades titanium is added to improve toughness, formability, and corrosion resistance. In martensitic steels titanium lowers the martensite hardness by combining with carbon and increases tempering resistance. In precipitation hardening steels, titanium is used to form the intermetallic compounds that are used to increase strength.

Niobium is a strong ferrite and carbide former. Like titanium, it promotes a ferritic structure. In austenitic steels it is added to improve the resistance to intergranular corrosion (stabilized grades), but it also enhances mechanical properties at high temperatures. In ferritic grades niobium and/or titanium is sometimes added to improve toughness and to minimize the risk for intergranular corrosion. In martensitic steels niobium lowers hardness and increases tempering resistance. In the US it is designated Columbium (Cb).Effects of alloying elements.

If added in substantial amounts aluminum improves oxidation resistance and is used in certain heat-resistant grades for this purpose. In precipitation hardening steels, aluminum is used to form the intermetallic compounds that increase the strength in the aged condition.

Cobalt is used in martensitic steels, where it increases hardness and tempering resistance, especially at higher temperatures.

Vanadium forms carbides and nitrides at lower temperatures, promotes ferrite in the microstructure, and increases toughness. It increases the hardness of martensitic steels due to its effect on the type of carbide present. It also increases tempering resistance. It is only used in stainless steels that can be hardened.

Tungsten is present as an impurity in most stainless steels, although it is added to some special grades, for example the superduplex grade 4501, to improve pitting corrosion resistance.

Sulfur is added to certain stainless steels to increase their machinability. At the levels present in these grades, sulfur slightly reduces corrosion resistance, ductility, weldability, and formability. At Outokumpu the trademark PRODEC (PRODuction EConomy) is used for some grades with balanced sulfur levels for improved machinability. Lower levels of sulfur can be added to decrease work hardening for improved formability. Slightly increased sulfur content also improves the weldability of steel.Effects of alloying elements.

Cerium is one of the rare earth metals (REM) and is added in small amounts to certain heat-resistant grades to increase resistance to oxidation at high temperatures.