Graphite and diamond are two of the most interesting minerals. They are identical chemically—both are composed of carbon (C), but physically, they are very different. Minerals which have the same chemistry but different crystal structures are called polymorphs.

Everything is made of atoms. Usually these atoms are strongly connected to one another, in an amazing variety of configurations. But atoms are so tiny, how can we possibly understand the structure of matter at the atomic level?

You probably have seen pictures of molecules or materials, zoomed in to the atomic level, which show spheres of different colors connected by lines.

In pictures like this, the colored balls represent different kinds of atoms or ions (ions being atoms that have either lost or gained some electrons), one for each color; and the lines represent the chemical bonds that keep the atoms together. 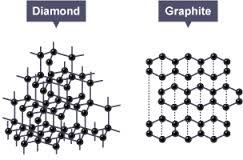 Both diamond and graphite are made entirely out of carbon, as is the more recently discovered buckminsterfullerene (a discrete soccer-ball-shaped molecule containing carbon 60 atoms). The way the carbon atoms are arranged in space, however, is different for the three materials, making them allotropes of carbon. The differing properties of carbon and diamond arise from their distinct crystal structures.

In a diamond, the carbon atoms are arranged tetrahedrally. Each carbon atom is attached to four other carbon atoms 1.544 x 10-10 meter away with a C-C-C bond angle of 109.5 degrees. It is a strong, rigid three-dimensional structure that results in an infinite network of atoms. This accounts for diamond’s hardness, extraordinary strength and durability and gives diamond a higher density than graphite (3.514 grams per cubic centimeter). Because of its tetrahedral structure, diamond also shows a great resistance to compression. The hardness of a crystal is measured on a scale, devised by Friederich Mohs, which ranks compounds according to their ability to scratch one another. Diamond will scratch all other materials and is the hardest material known (designated as 10 on the Mohs scale). It is the best conductor of heat that we know, conducting up to five times the amount that copper does. Diamond also conducts sound, but not electricity; it is an insulator, and its electrical resistance, optical transmissivity and chemical inertness are correspondingly remarkable.