The Compton effect (also called Compton scattering) is the result of a high-energy photon colliding with a target, which releases loosely bound electrons from the outer shell of the atom or molecule. The scattered radiation experiences a wavelength shift that cannot be explained in terms of classical wave theory, thus lending support to Einstein’s photon theory. The effect was first demonstrated in 1923 by Arthur Holly Compton (for which he received a 1927 Nobel Prize). 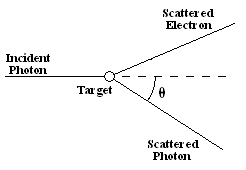 The scattering is demonstrated in the picture to the right. A high-energy photon (generally X-ray or gamma-ray) collides with a target, which has loosely-bound electrons on its outer shell. The incident photon has the following energy E and linear momentum p:

The photon gives part of its energy to one of the almost-free electrons, in the form of kinetic energy, as expected in a particle collision. We know that total energy and linear momentum must be conserved. Analyzing these energy and momentum relationships for the photon and electron, you end up with three equations:

If we care only about the energy and direction of the photon, then the electron variables can be treated as constants, meaning that it’s possible to solve the system of equations.

By combining these equations and using some algebraic tricks to eliminate variables, Compton arrived at the following equations (which are obviously related, since energy and wavelength are related in photons):

The value h/(me c) is called the Compton wavelength of the electron and has a value of 0.002426 nm (or 2.426 x 10-12 m). This isn’t, of course, an actual wavelength, but really a proportionality constant for the wavelength shift.

This analysis and derivation is based on a particle perspective and the results are easy to test. Looking at the equation, it becomes clear that the entire shift can be measured purely in terms of the angle at which the photon gets scattered. Everything else on the right side of the equation is a constant. Experiments show that this is the case, giving great support to the photon interpretation of light.